skip to main | skip to sidebar

Often, the hardest part of any project is STARTING. 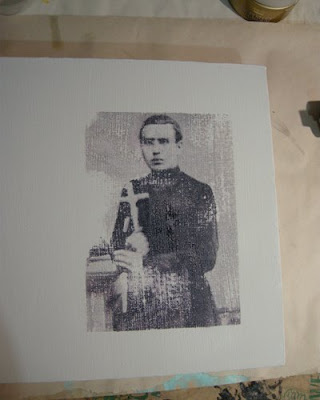 And, start I did. The initial stages of the first piece with a photo transfer onto the canvas (coated with an acrylic ground). This young man was 23 years old when this photo was taken. He was still a Brother then and it was not long before he embarked on his journey to Hawaii. 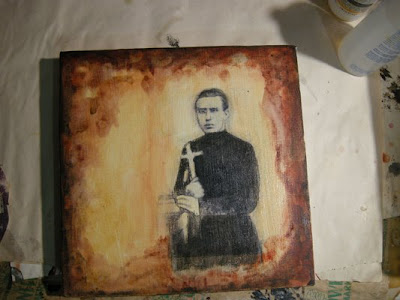 This is about more than halfway through completion.

Here is my artist statement for this project:
Where were you when you were 23 years old? What were you doing?

So many of us, even when we reach the age of 30 are not sure of what we want to do with our lives. We wait for that crystallized moment in time hoping to finally figure out why you were put on this planet to begin with. For many of us, that moment never comes with any kind of conviction or clarity and we spend most of our lives stumbling through it with a certain degree of uncertainty.

Imagine, at 23 years of age having such a strong calling to become a priest (or a vocation), that you leave your small town and family to sail halfway across the world to a place that couldn’t be any more opposite than where you came from. Talk about leaving your comfort zone! Most of us labor over trivial things such as deciding what to order off of a menu, or what to wear that day. In this day and age, people can commit to a tattoo more readily than they can a vocation.

April 15, 2009 marks a 120 years since Father Damien’s death (now Blessed Damien and soon to be St. Damien). Unless you were raised by a pack of wolves, you already know that he died of leprosy. Did you know that he was only 49 years old when he died? So very young.

Damien left Belgium to sail to Hawaii in November, 1863. He was still a Brother, not yet a priest. He was 23 years old. On March 19, 1864, he arrived in Honolulu, Hawaii. He ‘celebrated’ a birthday during that journey. I figure, that’s FOUR long months of an ocean voyage to get from point “A” to point “B”! I can’t even begin to imagine what kind of a journey that must’ve been.

Since I grew up on Molokai and lived just above the Kalaupapa Peninsula that lepers were banished to back in Damien’s day, I felt compelled to honor this man’s life work. The connection to him, for me is very strong. Until you visit this peninsula and the island, it is impossible to get a full grasp of what he accomplished. In so little time! Most people outside of Hawaii and Belgium know very little about this man’s remarkable life. I hope to at least raise the level of awareness for some of you.

When I was a teenager, Gavin Dawes published a life story on Damien, called “The Holy Man”. It was the first publication about Damien’s life. When I read this book (as a teenager), I wept. Profusely wept. I wept because it made me realize the extent of this man’s compassion and how far he was willing to go in order to make a difference in the lives of the people that were banished and abandoned to Kalawao (a district on the Kalaupapa peninsula).

On October 11, 2009, he will be canonized in Rome as a saint. Those of us from Hawaii and Belgium are quite jubilant about this (and that really is an understatement).

Creating nine pieces of art that commemorates this man’s life is a challenging project. There is only access to a limited amount of images of Damien throughout his life and everyone has seen them all. My approach is to use the images that many of us are already familiar with and give them my own twist. It is a visual outline of his life and his work. It is my hope that I impart to the viewer a greater sense of the enormity of his work.
Posted by Images of the Albuquerque Rail Yards at 3:43 PM 2 comments: 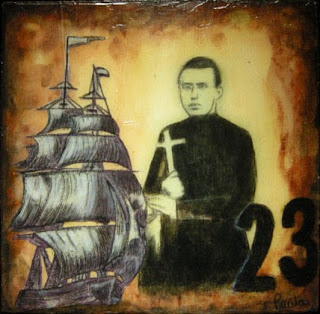 The completed image for "23"
Posted by Images of the Albuquerque Rail Yards at 3:41 PM 1 comment: 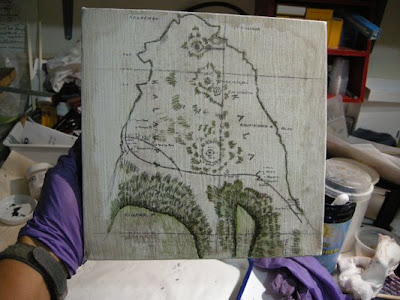 This is the second piece in the series of nine.


For this series, I am using a variety of transfer processes. You name it, and I've probably employed that transfer process in one of my paintings in this series. This is an old topography map of the Kalaupapa peninsula that I've transferred onto the canvas. The canvas was primed, then coated with an acrylic ground. The image was printed on "Sheer Heaven" paper, then transferred onto the canvas. After that, I start to bring up the image that I transferred by using colored pencils, oil sticks and acrylic paint. 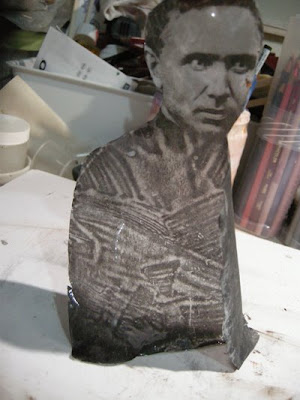 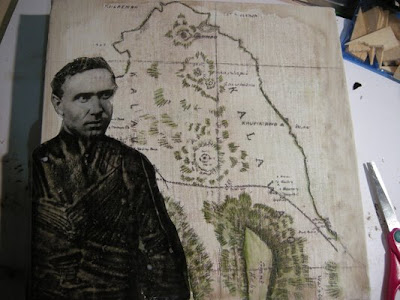 The elements are starting to come together, but I'm not anywhere done at the stage you see here.

At 33 years of age, Damien had been on the Big Island since his arrival in Hawaii. He accomplished a lot in the ten years he was there. During the Holy Week of Easter in 1873, he went to Maui to attend a dedication of a new church. The Bishop was looking for several priests to volunteer going to the Leper Colony on Molokai as there was much work to be done there. The thought was that he would recruit several priests and they would be there on a rotational basis. Damien volunteered and soon, he and the Bishop sailed over to the Kalaupapa Peninsula. He arrived there with just the clothes on his back, his Holy Cross and a breviary (a prayer book). That was it. 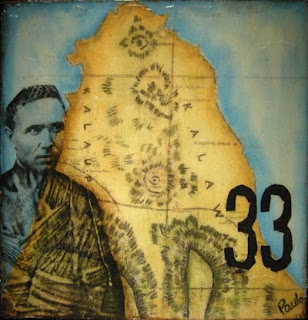 The completed image for "33"
Posted by Images of the Albuquerque Rail Yards at 3:38 PM 1 comment:

Sharing some of the process behind the one called, "The Carpenter" 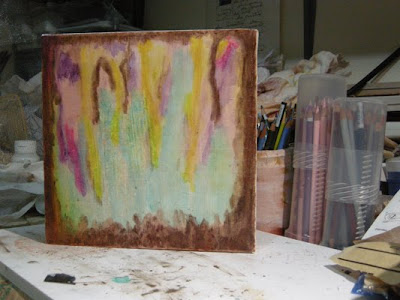 The under painting. Decisions are made as I go along; I work in a concept and process mode. I have a general idea of where I want to end up, but much is decided upon as I go along. 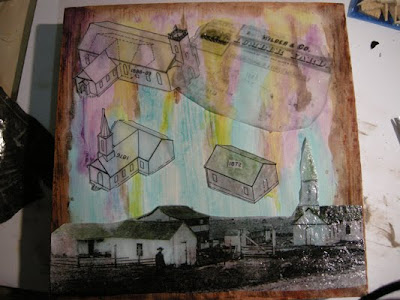 Starting to put down the content of this piece. One of the skills Damien acquired as a young lad was carpentry. You know, no TV, no video games, no phones...a kid with a lot of energy. It all got channeled by learning all the tricks of the trade in carpentry. I doubt that he thought he would use it as much as he did later on in life. But, he did. And then some.

The bottom image in this painting is a photo taken about 3 years after he got there. The three buildings above it was the church (St. Philomena). It was built the year before he got there and after Father Damien arrived in 1973, he added on and then added on again.

Those that suffer from leprosy often do not have full use of their hands or legs- because leprosy is much like a rotting disease (an oversimplification). Death came almost daily. Those that died were buried in shallow graves because if you are sick, how can you bury a fellow human being if you physically can't? Father Damien was horrified to witness the wild pigs coming along and uprooting these shallow graves and...well you can guess without my saying.

In the first six years that Damien was at Kalaupapa (Kalawao), he dug most of the graves and built most of the coffins for 1,600 people. 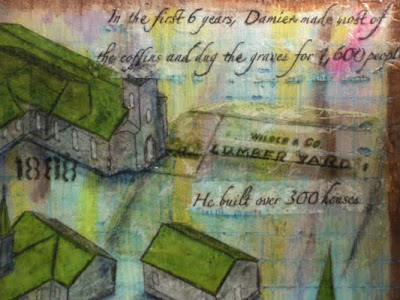 And, he built over 300 homes and structures in the 16 years that he was there. 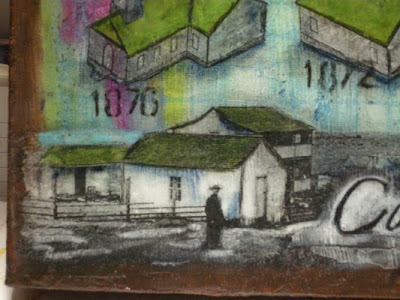 A bit staggering, in my opinion!
Posted by Images of the Albuquerque Rail Yards at 3:38 PM No comments:

Final Image for "The Carpenter" 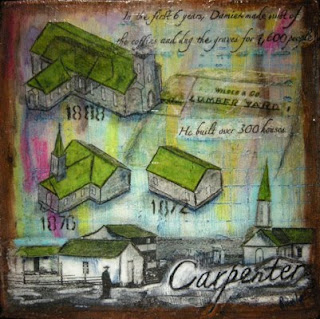 The completed image of "The Carpenter"
Posted by Images of the Albuquerque Rail Yards at 3:36 PM No comments:

"The Boys" is next in the series that I am working on that outlines Damien's work on Molokai. His story is worth telling because he brought more than hope and compassion to the 600-800 people that were literally banished to the Kalaupapa peninsula.

Fear and ignorance can easily separate us from our sense of humanity. Leprosy was spreading at an epidemic rate in Hawaii. There was no CDC at that time and the State Board of Health was the state agency responsible for making decisions as to how to handle this rapidly spreading epidemic. The solution to anyone diagnosed with the disease was to send them off to the Kalaupapa peninsula. This included children. 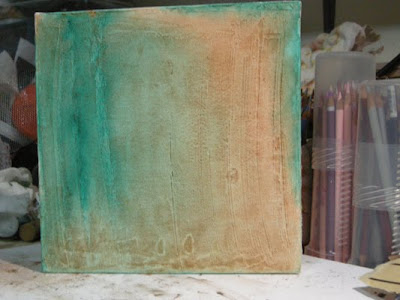 Once again, the under painting. 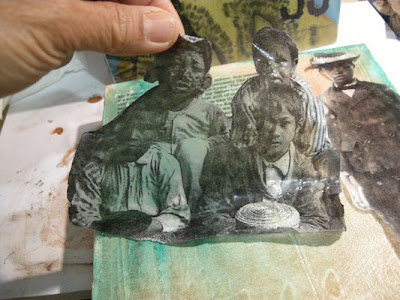 A gel transfer of a young group of boys who were already residents of Kalaupapa. At this stage, I am making decisions about the composition. Other parts of the image had already been removed.

This is the text that is incorporated into this piece:

My Father came to take me home from school. But instead of taking
me to the Kalihi Receiving Station immediately like the principal
said they should, my parents took me home. The whole family cried,
including my father. The next day my father took me downtown and
bought me a new suit. It was my first suit of clothes-they were so nice.
I looked good. I had never had clothes like that before because we were
poor. So I wore that suit of clothes to the Kalihi Receiving Station. Even
though we were poor, my father said he wanted me to be dressed
nicely when I was taken to Kalihi to be declared a leper. They took my
picture for the official record of the Board of Health wearing that new
suit of clothes. When the picture was taken, my father broke down again
and cried.

So, I became a leper.

This is the young man that this text refers to.
He was six years old.
(to see more, click on "Older Posts" at the bottom of the page)
Posted by Images of the Albuquerque Rail Yards at 3:36 PM 3 comments:

Copyright 2009. Copyright of photos, art and content is retained solely by the author of this blog. Please email for re-use permission: pmondoy@gmail.com

The Story of Damien

To see and read all of the posts on this blog, you can either click on the word "older posts" that appear at the very bottom of this page, or click on one of the titles of a post in the list of the blog's archives or labels.

Prints are available for purchase. The image size will be 8" x 8" and will come in a 12" x 12" mat with a backing. All materials used are archival.
If you are interested in purchasing a print or canvas print-you can go to my website at: www.molokaigirlstudio.com (you can also contact me via that website).

For Email Marketing you can trust

Other Damien Related Sites of Interest 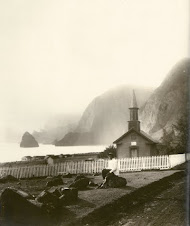 Click on the image to go to the site

Links for the curious of heart

6. Office of the Provincial Congregation of the Sacred Hearts, Damien Servant of God, Servant of Humanity, Franciscans of St. Anthony Guild,
New Jersey.